HEX is now ready to do another step in its evolutionary journey, taking complete control of the biggest club of Barcelona, Razzmatazz.
5 rooms with 5 shades of HEX, that will allow to fully express our vision of the perfect clubbing experience.

This event, called HEX at RZZ and that will happen on Thursday 27th of June 2017, is not only revolutionary because of its lineup. HEX wanted to mark a true milestone for the electronic scene of the city so, it decided to change the sound system of the whole club, for only one day, and to bring the best Funktion-One set up possible, by working directly with F1 official engineers in London.

Since the change will affect many aspects of the club, also the rooms acquire a new nomenclature apart from the “Loft” that retains its historical name.

In the main room, now called “Hall”, we find the Techno icon Ben Klock, owner of the label Klockworks and artist of Ostgut Ton. Ben has been already our guest, in the past January 2017 with a huge event at Input, Poble Espanyol. Before him, this time there will be Etapp Kyle resident artist of the Berlin’s Techno temple, Berghain. The hall’s opening that will be at 22:00 (2 hours before the other rooms) is entrusted to Huma, underground artist with great projection, present in the lineup of official Sonar Festival 2017. This artist inclined to peculiar ambient and experimental sounds, will perform live opening the night with the darkest and craziest atmosphere. Following Dario Rossi, street artist, by now one of the most known percussionists in the world, which will perform live using his typical percussion consisting of pans, pots, lids and other improbable tools. Finally, the closing will be held jointly in a b2b by the two HEX founders, Lorenzo and Pøli, as always responsible of showing the purest HEX style.

In the “Loft” we consolidate the collaboration with Pole Group, already presented in the Off Week, and in addition we introduce a new partner as Concrete, renowned Paris Techno club. Antigone and Francois X, first in the room timetable, are its residents. Next to them, the Pole Group’s boss, Oscar Mulero, in a special b2b with Tensal, second half of the Exium duo, even him co-founder of the label. Needless to say, this b2b between founders will be the center of attention. After all Perc, Pole Group’s roster artist and founder of the London label Perc Trax.

The Lolita, now renamed “Analog”, will be the room dedicated to just live sets and live visuals. The beginning will rely on Clip, talented artist of the city, former professor at the Escuela Academy 303, and part of the past edition of official Sonar and Red Bull Music Academy. Architectural (other aka of Reeko), that will present us his more atmospheric and astral side. Boston 168, fast rising Italian duo with acidic sonority. Voiski, French artist of undoubted talent (with releases on Dekmantel) specialized in neo-trance sound. Last but not least, it is worth mention the presence of another local Techno representative, resident artist of Insert, Flug, who will perform a live-solo for the first time.

Moving to the Attic, “Rex” room, HEX wanted to support the talented local artists of Barcelona giving them an entire room. Here we find Petru, underground vinyl artist, Neiland, founder of Astra Space Travel, Javi Lago, Catalan historic leader of Sintetics, and finally Andre Crom, an international artist based in Barcelona, and founder of the labels OFF Recordings and VOID.

Finally, in the gallery, HEX will collaborate with Glove to give a touch of coolness and extravagance devoting this room to a different and more fresh genre. Here will perform the residents of Glove Zonzo and Josep, the band Tversky playing live and Jamie Tiller. A perfect room to take a break from the darkness and make a trip back in the days, right in the 70’s. 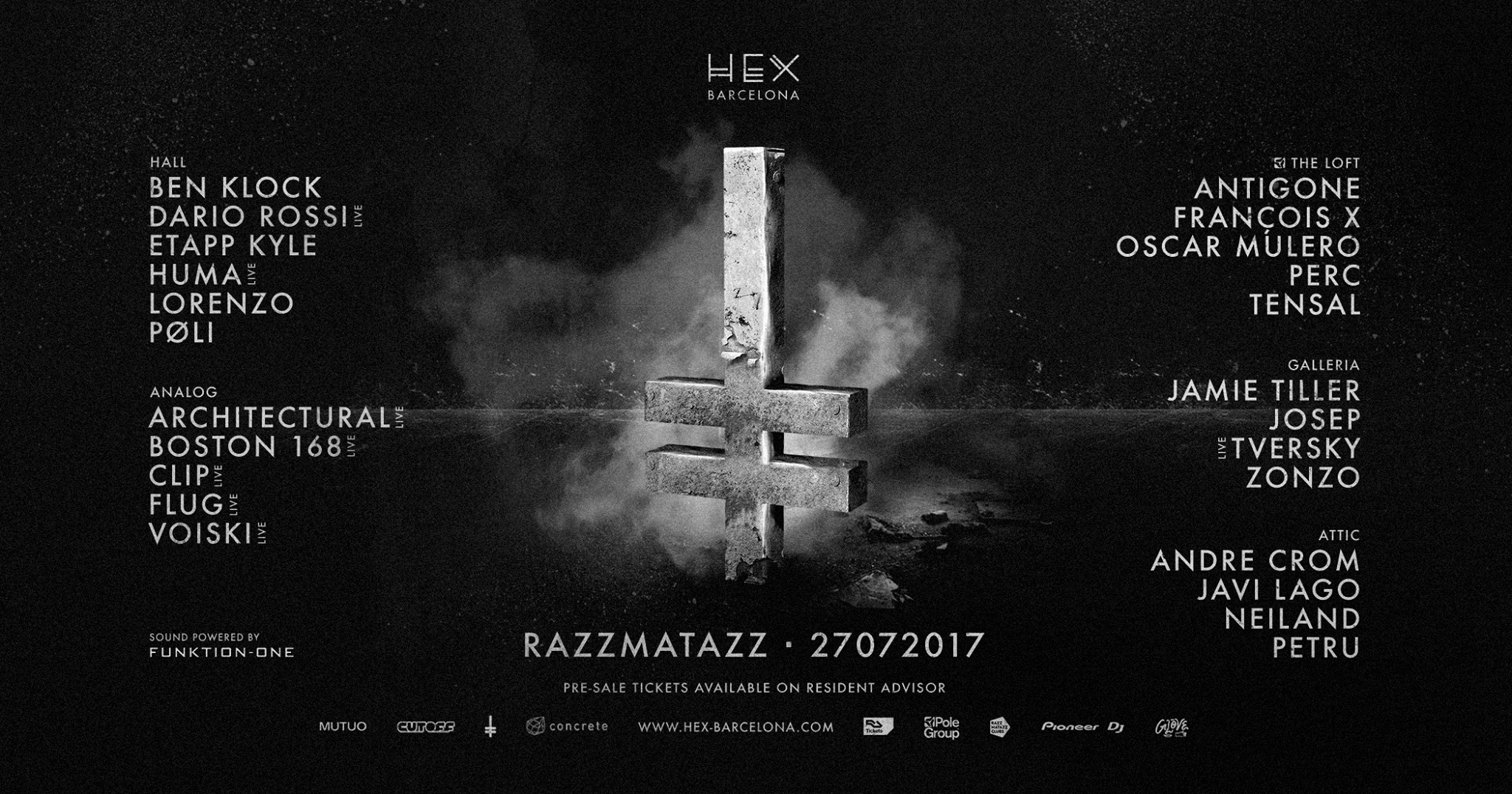 See you in the darkness.